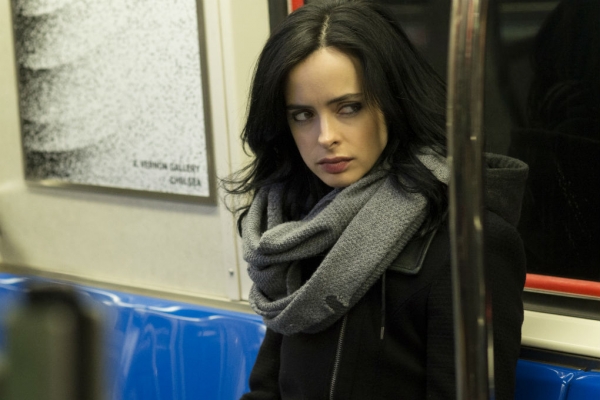 So I finally finished watching Jessica Jones. Yeah, I know. Welcome to 2015. Anyway, while it was a great show, there were a few things that bugged me. This review will contain spoilers, so be warned.

The biggest problem I had with it was the lazy writing. I already covered private eye cliches in an earlier post. In addition to that, the overall plot of the show involved Kilgrave killing someone, Jessica capturing him, and him escaping. This pattern repeated about four or five times. The writers totally could have come up with a better plot than that, they just weren’t trying. I mean, if that’s all the plot they had in them, they should have made the show several episodes shorter.

Also, they kept killing off characters Jessica cared about to move her plot along. I guess this technically doesn’t count as using the Women in Refrigerators trope since the deaths were serving a female character’s story line, but it’s still lazy writing. I mean when Hope’s parents died at the end of the first episode, it was genuinely shocking. But the rest of the character deaths (Ruben, Wendy, etc.) just felt like lazy writing to me. A cheap way to shock the audience. Some of the deaths didn’t even make sense. Why did Simpson kill Clemons? No reason other than to shock the audience. Why did Hope kill herself? No reason other than to shock the audience. I guess the deaths wouldn’t have been as shocking if there was a reason for them, but surprise just for the sake of surprise is the hallmark of bad writing in my book.

Also, in the flashback when Jessica discovers her powers by snapping a marble sink in half, she convinces her adopted sister not to tell anyone. I couldn’t help wondering how they explained the sink to mom. In another scene, Trish consumes a substance that’s killing her and we see a flashback of Trish’s mom making her throw up. Does Jessica put two and two together and realize Trish needs to throw up the pill that’s making her sick? No, she calls an ambulance instead.

The drug addict character’s transformation into an upstanding citizen happened too suddenly. And why didn’t Jessica know she was immune to Kilgrave’s power sooner? You know, back when the audience figured it out? Also, in a world in which everybody knows superpowered people exist, why doesn’t anybody believe Kilgrave exists?

I was also wondering about Jessica’s powers. She has super strength and can leap long distances, but there was also an episode early on in which she seemed to have super speed because she was able to catch up with a car while on foot. She didn’t have super speed in any other episode, so maybe she caught up with the car by taking an unseen taxi? Who knows.

Apparently, Kilgrave’s mind control works via a virus. Really? On Gotham, the Mad Hatter’s use of hypnosis is more plausible and that’s not plausible at all. On Preacher, the title character gained mind control powers via supernatural means, which frankly makes more sense. Speaking of Preacher, a character on that show makes himself deaf to be immune to Preacher’s mind control powers. Why didn’t any of the characters on Jessica Jones think of that? In the final episode, Trish wears headphones blasting loud music to keep herself from being controlled, but this should have been something everyone was doing from episode two.

It was interesting to note that every white male character on this show was either a villain or a victim. I actually didn’t have a problem with this. White men have been the heroes on TV long enough. It’s OK to have a TV show without any heroic white male characters for a change.

Anyway, if you can look past the occasional instances of lazy writing, it’s a pretty good show overall. I’d definitely recommend watching it.