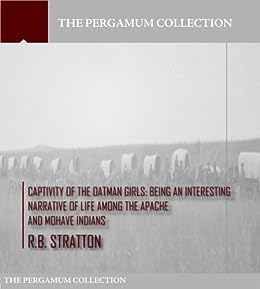 “Just as the sun was gladdening the clear west, and throwing its golden farewells upon the innumerable peaks that stretched into a forest of mountains gradually rising until they seemed to lean against the sun clad shoulders of the Rocky Range, imparadising the whole plain and mountain country in its radiant embrace, [etc., etc.]” (page 2)

Captivity of the Oatman Girls: Being an Interesting Narrative of Life Among the Apache and Mohave Indians by R. B. Stratton was originally published in 1857 and it was a best seller for its time. Something I love about reading books from earlier eras is the different language they used back then. This book hits you with a lot of flowery language at the outset, however, Stratton doesn’t try as hard as the book progresses. A large part of the book is comprised of extensive quotations from the surviving Oatmans, Olive and Lorenzo. It was nice to hear most of the story in the survivors’ own words.

Another common practice from back when this book was written is quoting without providing the source of the quote. Without the help of Google, I’d never know that a couple great lines of poetry quoted by Stratton were from “Lays of Women” by Mrs. Cornwell Baron Wilson and “Of Truth in Things False” by Martin Farquhar Tupper. Also common to the time period is very long chapter headings which give away spoilers for everything that will happen later in that chapter.

Something I don’t like about books written in earlier eras is the racism, and this book is chock full of it. We’re told “Mexicans are an imbecile, frail, cowardly, and fast declining race” (page 19). Apache are likened to an infestation and various other Native American tribes are denigrated throughout. Since the book is about a family being massacred by Apache with two of the girls being kept as slaves for five years, the racism is understandable, but it’s still unfortunate. The book at least acknowledges that whites can act just as savagely in the conclusion.

We start our story with the patriarch of the Oatman family, Roys. He never seemed to be satisfied staying in one place. He supported his family both by physical labor and as a school teacher. However, he injured his back once while digging a well for a neighbor and never fully recovered. He kept doing physical labor even though it was extremely painful for him, especially when it was cold.

Eventually, he meets a group of families intending to travel to California in order to create a utopian society free from prejudice, pride, arrogance, and caste. (The book doesn’t tell us this, but they’re a splinter Mormon group known as the Brewsterites.) He decides to go with them because he likes their ideals, but also because he hopes the climate will be easier on his injury. His innate wanderlust probably played a part as well.

We aren’t told much about his wife, Mary Ann, other than she was pious and devoted to her husband. Also, while we’re given the names of the other family patriarchs going on the journey, we aren’t told the names of their wives. Because, you know, this was published in 1857.

“Mutual perils and mutual adventures have a power to cement worthy hearts that is not found in unmingled prosperity.” (page 9)

The party encounter several hardships on their journey including hostile Indians, mountain fever, rough terrain, and extreme conditions. It’s not all depressing, though. A couple humorous interludes are recounted. At one point in the journey, a “Mrs. M.” makes dumplings and hides them in her wagon, however a certain “Mr. A. P.” sees where they are hidden.

“Now this A. P. had started out sick, and since his restoration had been constantly beleaguered by one of those dubious blessings, common as vultures upon the plains, a voracious appetite, an appetite that, like the grave, was constantly receiving yet never found a place to say, ‘Enough.’ […] He deliberately emptied almost the entire contents of this huge dumpling pan into his ever-craving interior.” (page 14)

When Mrs. M. discovers what he did, she “seized a stake, and thoroughly caned him through the camp, until dumpling strength was low, very low in the market.”

In another humorous interlude, Mrs. M. falls into a covered up well and there’s another point at which two grown men run away from their own children, supposing them “Injins.” I don’t think any of would necessarily be considered funny by today’s standards, but it gives an insight into the time period.

The party ends up splitting up due to a disagreement. The families that traveled with the Oatmans stay for a time in a Mexican village where the Mexicans implore them not to leave, fearing Indian attack. Some of the families stay, while others continue on to a Pimole village. Some more families decide to stay here and the Oatman family ends up proceeding by themselves.