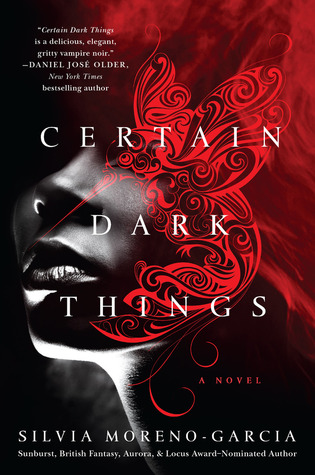 Certain Dark Things takes place in an alternate version of Mexico City in which vampires are known to exist. There are ten different types of vampires listed in the glossary, each with their own strengths and weaknesses (somewhat reminiscent of the role-playing game Vampire: The Masquerade). Only three different types of vampires appear on screen which is for the best as trying to keep track of ten different species would have been confusing. The fact that there’s a wider world of vampires out there does leave plenty of room for a sequel or even a series.

There are many great details in this book. I liked that one of the breeds of vampire, for instance, has a compulsion to count things. They try to avoid the blood of diseased people and will vomit up unsuitable blood. I also liked that vampires sometimes trigger the uncanny valley response in people which totally makes sense, but I haven’t come across before.

Since this takes place in an alternate universe, I’m not sure which details about Mexico City are true to life, but the Mexico City in this novel has a lot of character. There’s a Little Seoul district, for example. Also, there’s a game called Mexican roulette in which people pass around jumper cables until one of them gets shocked.

In this world, the European vampires colonized the Aztec vampires the same time Eurpoeans were colonizing the Americas: “In the times of the Aztecs, when the first Necros arrived upon our shores, they quickly spread disease among the local vampire populations. Many members of my family died simply due to coming in contact with the Necros, greatly reducing our capacity to fight against the invaders. Germs can be much more effective than swords.”

Each of our viewpoint characters are interesting and distinct. Domingo is a homeless teen who fantasizes about the vampires in his comic books before meeting a vampire in real life. Atl is a Tlahuihpochtli, an Aztec vampire with avian features, whose kind used to be worshiped but is now in decline due to colonialism.

Atl is being hunted by the Necros, in particular the vampire Nick and the human Rodrigo who works for them. (Humans who works for vampires are called Renfields in a reference to Bram Stoker’s Dracula.) Rounding out the cast is single mother Ana Aguirre, apparently the only detective in Mexico City who isn’t corrupt or lazy, who is charged with solving the murder of a young woman killed by a vampire.

This book has great world-building, great characters, and a great plot. Recommended.