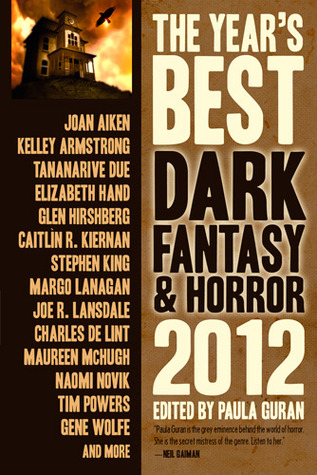 In her introduction to The Year’s Best Dark Fantasy and Horror 2012, editor Paula Guran says “dark” can mean different things to different people, thus not every story in this collection will necessarily be considered “dark” by every reader. Fair enough. Most of the stories in this collection are horror, although we do get a couple humorous pieces and even some romance.

We start with “Objects in Dreams May Be Closer Than They Appear” by Lisa Tuttle. I felt this was an odd choice to start the collection as it takes a while to get going instead of grabbing the reader from the beginning. A large chunk of the story felt like an ad for Google street view. I did like the dream-like quality of the story towards the end in which mundane things provoke an irrational fear, but ultimately, I felt like there wasn’t enough substance to the story.

“Tell Me I’ll See You Again” by Dennis Etchison reminded me of the television series Pushing Daisies. The opening scene clues us in to the theme of playing possum. The story featured a strange gimmick though. Although other characters are named, one of the characters is referred to simply as “the girl” outside of dialogue, although we are given her name within dialogue. Don’t know why he did this. This was an interesting story, but it ended too suddenly, almost like he didn’t know how to end it.

“Josh” by Gene Wolfe is a haunted house story in the form of a diary. This one also seemed to end abruptly. More of a fragment than a full story. “Walls of Paper, Soft as Skin” by Adam Callaway is a weird story, but it too was too short and thus felt insubstantial.

Several of the stories in this collection were meh for me, but your individual mileage may vary. “Rakshasi” by Kelley Armstrong concerns a demon making restitution for wrongs done in life. “The Dune” by Stephen King is about an island that foretells death. “Journey of Only Two Paces” by Tim Powers is about a book dealer who fulfills an unusual request in a will. “The Lake” by Tananarive Due is about the dangers of skinny dipping. “Hair” by Joan Aiken is an atmospheric piece with a sense of tension, but not much happens.

“Near Zennor” by Elizabeth Hand is about an old man who goes through his wife’s things after she dies and discovers she corresponded with a pedophile when she was a teenager. It’s a good story if you don’t mind the slow pace. This story is about fifty pages long, but it should have been shorter. There are some boring parts that could have been cut and there’s too much description including several lists of flowers. The bulk of the story is about the old man wondering around the Cornish countryside trying to find his way.

“All You Can Do Is Breathe” by Kaaron Warren is about a miner trapped in a collapsed mine that’s also haunted. His long-lasting fame after his rescue didn’t ring true to me and pulled me out of the story. It’s a decent story, but I did hear it before on a podcast and it wasn’t as interesting for me the second time through.

“Why Light?” by Tanith Lee is a vampire romance which I wouldn’t classify as dark. It’s written in a distractingly stylized way with words italicized seemingly at random. And how many words need to be emphasized per sentence anyway? Sometimes she puts words into “quotes” or Capitalizes them for emphasis instead of using italics for some reason. She also uses words like “un-new.” It’s a fine story if you can get past the presentation, though.

“King Death” by Paul Finch takes place during the plague and starts with a great grisly image. It was a good story, although his overly flowery language made me wonder if he wrote this with a thesaurus.

“Catastrophic Disruption of the Head” by Margo Lanagan is a retelling of Han Christian Andersen’s fairy tale The Tinderbox. It’s disjointed, but definitely dark. “Conservation of Shadows” by Yoon Ha Lee is a decent retelling of the Inanna story.

“Vampire Lake” by Norman Partridge is an over-the-top Western featuring a vampire hunter. Here’s a quote I liked: “Their eyes were trained on the campfire and the white smoke that rose from it, which swirled and twisted like it was trying to knot the darkness.”

“A Tangle of Green Men” by Charles de Lint is a young adult romance between a Native American and a vision-impaired girl who meet at a faery convention. At forty pages, it’s one of the longer stories in this collection, but remained engaging throughout.

“After the Apocalypse” by Maureen McHugh takes place, you guessed it, after the apocalypse. The main character is a mother who is annoyed by how weak her daughter is. The mother is the type of person who shoots first and asks questions later, which made it hard for me to relate to her, but also made her feel more realistic. Society collapses gradually in this story, not all at once, and sex is used as currency. More realistic than most apocalyptic stories. Very tense.

“The Bleeding Shadow” by Joe R. Lansdale features a private eye investigating an evil record in Texas during the segregation era and a musician who makes a deal with the devil. A good story that held my interest.

“Mysteries of the Old Quarter” by Paul Park is about a man haunted by a vengeful ghost. It takes place in New France and it’s written in the form of undelivered letters, journal entries, a police deposition, a newspaper clipping, etc. Really good.

There are a lot of good stories in this collection that I don’t have a lot to say about. “The Fox Maiden” by Priya Sharma is a fantastic story involving were-creatures and fox hunting. “The Bread We Eat in Dreams” by Catherynne M. Valente is told from the point of view of a demon who was kicked out of hell. We get the story of a town over the course of several generations which is hard to do in a short story.

“Crossroads” by Laura Anne Gilman involves a duel between magicians in the old west. “Lord Dunsany’s Teapot” by Naomi Novik is a literary story that takes place during trench warfare. A good, quiet, thoughtful story. “The Last Triange” by Jeffrey Ford is about a junkie who gets an unusual request from an old woman. “After-Words” by Glen Hirshberg takes place in a world in which books are forbidden.

“Four Legs in the Morning” by Norman Prentiss is about an academic who stays at a cabin while working on a book about Oedipus Rex. I like that it incorporates Harold Bloom’s Anxiety of Influence (writers have to symbolically kill their fathers, i.e., those who’ve influenced them, in order to feel like they’ve come up with something new). I’ll admit the ending confused me, until I remembered how the story of Oedipus went.

“The Maltese Unicorn” by Caitlín R. Kiernan was my favorite story in this collection, which surprised me since I haven’t cared for other writing of hers before this (particularly The Sandman Presents: Bast). This is a hard-boiled detective story in which a sarcastic book shop owner tracks down a supernatural artifact. It remained engaging throughout and impressed me with its period-appropriate references. Also, I think it’s the only story I’ve read that touches upon the topic of female on female rape. Here’s a favorite quote from this story: “The crimson halo surrounding the switchblade’s inlaid mother-of-pearl handle was still spreading, blossoming like some grim rose, and now there was blood dripping to the floor, as well.” Highly recommended.