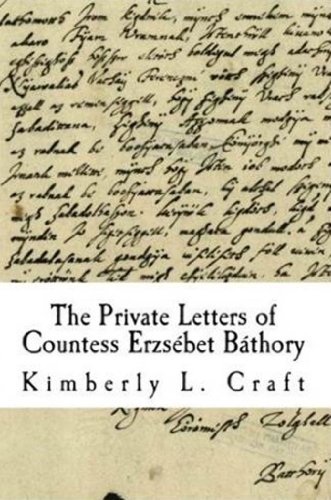 Erzsébet (Elizabeth) Báthory was a medieval Hungarian countess, best known for bathing in blood to keep herself young. While it’s a myth that she bathed in blood, there was a trial in which she was said to have tortured and killed several servant girls. The trial itself, however, was rather irregular, so whether Elizabeth Bathory was indeed guilty or not is still an open question.

The Private Letters of Countess Erzsébet Báthory by Kimberly L. Craft is a supplement to the author’s book Infamous Lady. It provides a look at the infamous countess’s day to day life. Although she was the wealthiest person in Hungary at the time, she had constant money problems due to the fact she had no liquid assets. It was a time when everyone had money troubles due to massive inflation as well as expensive wars and rebellions to deal with.

The Royal Treasury owed Countess Bathory money, but claimed not to have the money even though they did. They even bought one of her properties and made her keep paying taxes even though they were the ones who owed money to her. She was accused of not being as strapped for cash as she claimed to be because she owned two greyhounds. She defends this by insisting that she only bought herself one and the other was a present. We learn in another letter that she couldn’t afford to travel with an armed force.

Since her husband was often away at war, she ran pretty much everything. In letters to her provisor, she starts out being polite to him when she was in her early twenties, but becomes more critical of him by the time she reaches her late twenties. He was apparently the type of guy who didn’t reply to letters or follow instructions. One letter deals with the matter of some missing cannabis.

She dealt with administrative duties such as prisoner exchanges, making repairs after war, elections of local officials, appointment of church officers, and tending to business. In one letter, she demands the men who robbed from an old woman and raped her daughter be punished. After being widowed, Bathory felt overwhelmed and often wrote to a family friend for advice. When the army asked her to sell wheat to them at a significant loss, she refused. When other people took over her land, she wrote threatening letters to get them to back down. She certainly wasn’t afraid to stand up for herself.

It was interesting to learn that gold and silver thread (skeins) which were used as embroidery on fine clothes, was also used as currency since it contained gold and silver. Interestingly, silver was actually worth twice as much as gold during this time since it was difficult to mine during the war.

Hapsburg troops looted and burned Countess Bathory’s villages, causing more damage than the Turks they were supposed to be protecting her from. During the Counter Reformation, Catholics persecuted Protestants like Bathory all over central Europe. During the Bocskai rebellion, many of her people were killed. A few estates didn’t have enough people left to maintain or defend the property. The letters indicate that Bathory remained loyal to the king, although she may have made a deal with Bocskai to lessen the damage to her property.

While Countess Bathory expresses anger in some of her letters, there’s no proof in any of them that she was a murderer. In her commentary, Craft assumes that Bathory was guilty based on the testimony at trial. I don’t think she mentions in this book that most of the witnesses at trial were either reporting hearsay or were tortured to confess, making their testimonies somewhat dubious.

We may never know if Countess Bathory was a serial killer or not, but these letters, many of them published in English for the first time, give us great insight into her life and times. I learned a lot of interesting things and would recommend this book to anyone interested in Elizabeth Bathory.