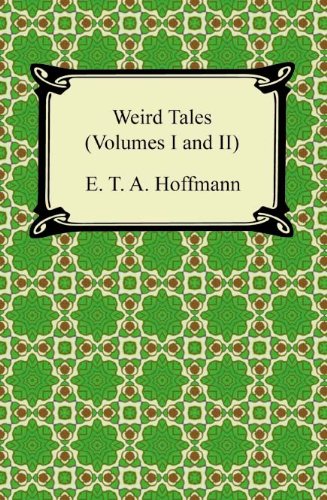 E. T. A. Hoffman is best known for his story “Nutcracker and Mouse King” which was turned into the famous ballet. “Nutcracker” isn’t included in this volume, but this collection does contain “Mademoiselle De Scuderi” which many consider to be the first detective story. Some also credit Hoffman with starting the Romantic movement.

I had a lot of fun with this. It takes place in a time in which people wore wigs, men always had swords with them, women used snuff, and hunting, dueling, and fainting were all the rage. Hoffman’s main characters are usually artists, musicians, or writers in the opening stories to this collection, although coopers, goldsmiths, carpenters, and gamblers appear in later stories. I wonder if these were published in chronological order and he started with more autobiographical stories before moving on to telling stories about other people. He sometimes breaks the fourth wall, and includes a lot of humor in his stories. Most of the stories involve young couples in love.

Although largely realistic, these stories feature occasional weirdness such as an automaton, a somnambulist, and ghosts. One story makes a reference to the wave of copycat suicides that occurred after the publication of The Sorrows of Young Werther. The men who appear in his stories often act quite strangely. Women are usually little more than romantic interests, although we do have an exception in Mademoiselle De Scuderi, the elderly detective. In “Arthur’s Hall”, there’s also a woman who dresses up like a man, but she still ends up being little more than a romantic interest.

My favorite story is “The Sandman”, an excellent surreal horror story featuring alchemy, automata, bloody eyeballs, and a child afraid that the Sandman will throw sand in his eyes and steal them if he doesn’t go to sleep on time. It’s the only horror story in the collection, so definitely not representative of the collection as a whole, but the one that definitely stood out.