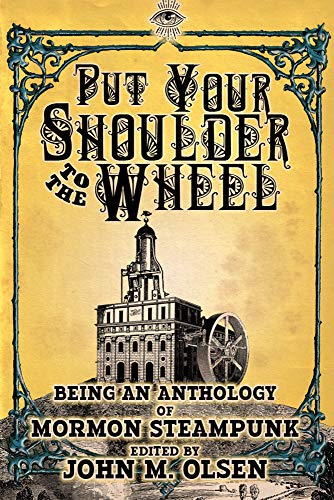 Goat in the Machine  – Scott William Taylor
A Reckoning in the Night – Angie Taylor
Rachel’s Prayer – Megan Rupp
Sisters Sorenson and the Mechanical Man – Scott E. Tarbet
The Shop of the Clockwork Master – Finlay Lofthouse
Blackhand – Christopher Baxter
An Incident at Oak Creek – Bryce Moore
The Miracle of the Gulls – D. J. Moore
Solids Don’t Evaporate – Mindie Erb
Many Hands – Heidi Wessman Kneale
By Ailad’s Bootstraps – Kurt F. Kammeyer
Painted Ghosts – Kim May
Dame Ginny McLaserbeam and the Dastardly Duke – Judith and Michael Collings
I haven’t read it yet (except for my own story, of course), but the story I’m most looking forward to based on the title alone is “Dame Ginny McLaserbeam and the Dastardly Duke” by Judith and Michael Collings. If I’m not mistaken, the titular character, Dame Ginny McLaserbeam, made an appearance in Michaelbrent Collings’ book The Longest Con.
This anthology should be a lot of fun. Be sure to check it out.