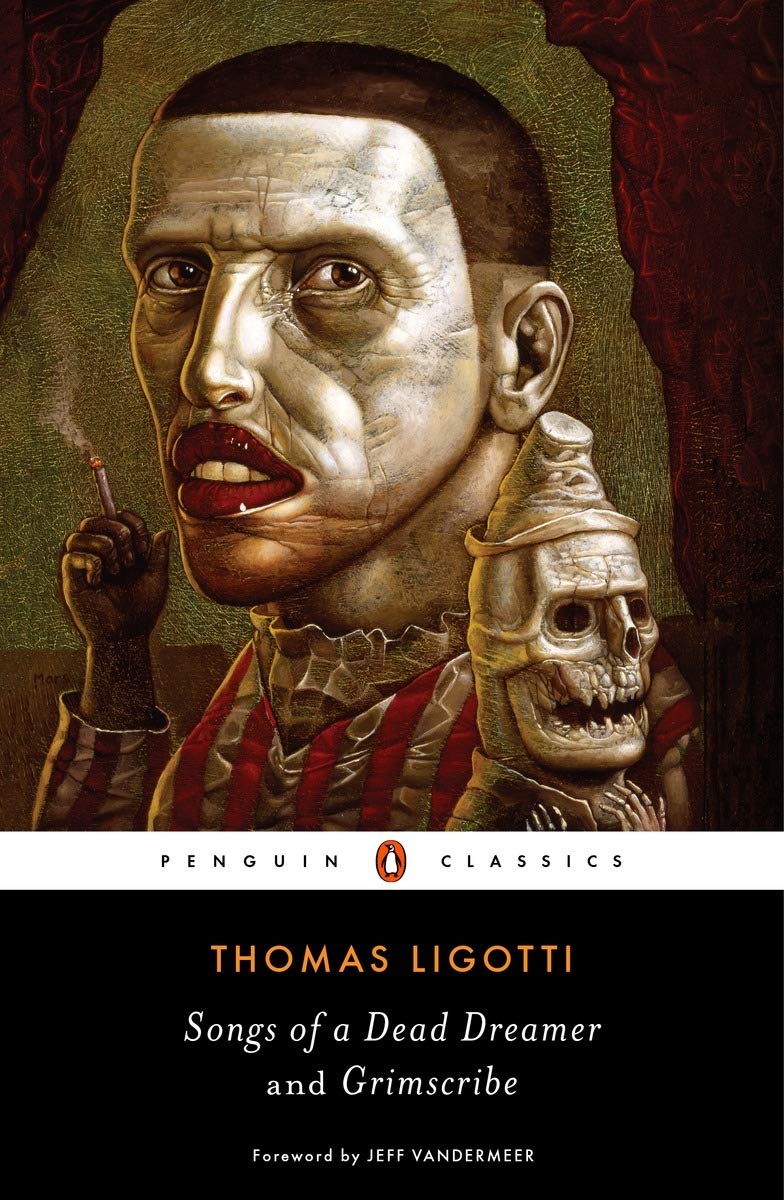 “There are things which only madmen fear because only madmen may truly conceive of them.”
Thomas Ligotti’s writing is quite reminiscent of H. P. Lovecraft’s in many ways. They both like to use what I think of as “thesaurus words” like tenebrosity and Piranesian, making many stories feel like the author values style over substance. Their narrators are often academics steeped in occult lore who come to realize humans are insignificant on a cosmic scale. They both have a preoccupation with dreams and cults. Neither feature very many female characters.
Ligotti’s monsters are less ridiculous than Lovecraft’s and there’s no overt racism, so Ligotti is certainly a step up from HPL. He’s also a much better writer, although plot often takes a backseat to overly flowery language. One complaint I had as I went along is the uniformity of his stories. Several of the stories are so similar to each other, they pretty much blur together. For example, “The Library of Byzantium” and “Miss Plarr”, both narrated by a child artist, felt like pretty much the same story.
The first story in this collection is “The Frolic” in which a misanthropic prison psychologist has a conversation with his wife about a serial child killer named only John Doe. I like the matter-of-fact way the story is presented. More effective than if it went for histrionics. This one stands out from the rest of his stories in that it has a more existential feel to it. It felt more like Sartre or Camus than Lovecraft. One of the best in this collection.
In “Les Fleurs”, an artist starts dating a florist. His previous lover disappeared under mysterious circumstances. It takes the form of a diary and the supernatural world was only hinted at, which was nice.
If I’m not mistaken, “Alice’s Last Adventure” is the only story in this collection with a female narrator, although the gender of many of his narrators isn’t made explicit. A children’s book author talks about her character Preston who decides not to grow up. After the funeral of the person he was based on, she starts seeing spooky things.
In “Dream of a Manikin”, a psychiatrist attempts to help a patient with a creepy recurring dream in which she switches places with a manikin. I liked the concept of divine masochism presented in this story. It’s a solipsistic nightmare in which God tortures himself by tricking part of himself into thinking he’s just a man. I liked it overall, but I felt the ending where he switches narrators was unnecessary. (He also does this for the last paragraph of “The Christmas Eves of Aunt Elise” and I felt the sudden narrator switch was unnecessary there as well.)
“The Nyctalops Trilogy” is composed of three separate stories in which a man has the ability to control women. In the first story, a condescending chemist picks up a prostitute at a bar and mentions a revolutionary new chemical his company is working on. In the second story, a hypnotist controls his assistant. This one reminded me of The Secret of Ventriloquism by Ligotti fan Jon Padgett. In the third story, a psychic visits an S&M club. I’m not sure why these three stories are grouped together into a trilogy. Perhaps the narrator is meant to be the same person in all three stories?
“Notes on the Writing of Horror: A Story” is a metafictional piece. Ligotti uses a story about a man with cursed trousers to illustrate different ways of writing a horror story. He says a traditional gothic story is any story that uses excessively emotional language. I thought there was more to it than that. He says realistic stories present the supernatural in a realistic way. Can’t a realistic horror story not involve the supernatural at all? He saves the best version of the story for last (confessional style), but it takes a long time to get there. Similarly, “Professor Nobody’s Little Lectures on Supernatural Horror” isn’t a story, just a lot of pessimism.
In “The Lost Art of Twilight”, an artist is visited by family from France. His mother was a vampire and he himself shuns the sun. Part II of this story felt unnecessary since it basically just retells the story from Part I.
“Masquerade of a Dead Sword: A Tragedie” is one of the best in this collection. Unlike most of the stories which take place in present day urban environments, this one takes place in a vaguely medieval setting. Faliol is a mercenary who possesses magic spectacles. What would drive others mad brings him comfort. Reminded me of The King in Yellow by Robert W. Chambers.
A couple of the better stories in this collection include “The Greater Festival of Masks”
and “Vastarien”. I quite liked “The Cocoons” in which creatures hatch out of people, but it felt too short and the ending felt like a punchline. I loved “The Night School” in which a student tries to find a class in a dream-like tale, but again the ending felt like a punchline. “The Glamour” which features a movie theater that’s not what it seems was reminiscent of the previous two. These three must have been written around the same time.
The best two stories in my personal opinion are “The Last Feast of Harlequin” in which an academic studying clowns goes to a small town solstice festival and “The Shadow at the Bottom of the World” in which a creepy scarecrow presages darkness to come in a small town. While a lot of the stories in this collection kind of blurred together, there are several good ones that stand out.