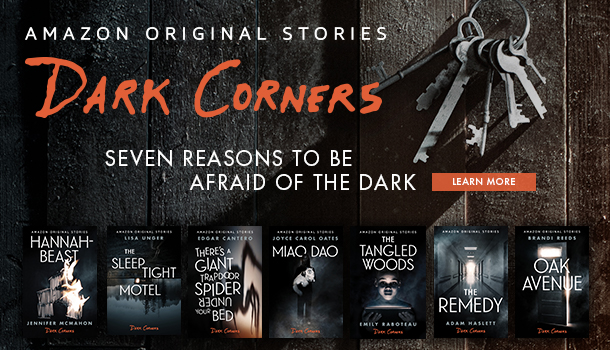 Dark Corners is a collection of horror short stories published by Amazon, which I’d say is worth your time overall.

“There’s a Giant Trapdoor Spider Under Your Bed” by Edgar Cantero takes place in a world in which anything you say becomes reality. It’s both fun and funny and also has a couple scary moments. Four children who are all Harry Potter fans (and who each belong to a different Harry Potter house) are having a sleepover when the ability to summon monsters like giant trapdoor spiders into existence becomes a problem.

Since they brought the monsters into existence by simply declaring they exist, you’d think they could dismiss the monsters the same way, but this possibility is never raised. It’s also sometimes difficult to picture the layout of the room all of this is happening in. For me, the funniest line is when a character loses his reflection and asks how he’ll be able to shave. Someone points out that he’s never shaved before, to which he replies, “Well I have plans!” Good fun.

In “The Remedy” by Adam Haslett, a person with an unspecified medical condition seeks unusual help. It’s not a horror story until the end, so tension builds as you read through, waiting for the other shoe to drop. It’s pretty good, but I did feel like the ending was anticlimactic when we finally got there.

“Miao Dao” by Joyce Carol Oates is about a 13-year-old girl who gets sexually harassed by older boys at school as well as by her new step-father. She befriends a feral kitten and her tormentors start dying. I was expecting the ending to be predictable, so I was pleasantly surprised when it turned out something else was going on.

I did feel like there were several loose ends in the story, though. We’re told Mia blames herself for her parent’s divorce, we’re told she develops an eating disorder, we’re told she grows distant from one of her friends, but all these threads are dropped, which made the beginning of the story feel like it was just meandering.

“Oak Avenue” by Brandi Reeds is a typical haunted house story. A woman is renovating a creepy old house while her husband is away for work. She also has a young child to take care of. The townsfolk, including her in-laws, are unfriendly towards her and when her husband does put in an appearance, he seems to be gas-lighting her. A good, solid story that’s well-told, even if the concept isn’t new.

“Hannah-Beast” by Jennifer McMahon switches between showing a teenage girl getting bullied in the 1980s and showing her getting revenge in the present. A very brutal story with a surprise ending.

“The Tangled Woods” by Emily Raboteau is about a black family going on vacation to a Harry Potter style theme park. They get pulled over by a cop along the way and have to deal with rednecks. An anxiety-filled story with a brutal ending.

“The Sleep Tight Motel” by Lisa Unger reminded me a bit of Alfred Hitchcock’s Psycho. A woman on the run stops at a creepy motel and something seems off about the owner. However, the story takes a turn I wasn’t expecting.