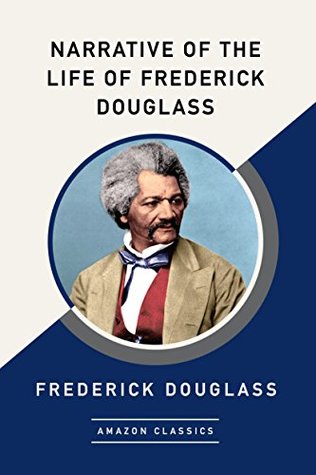 “I have often been awakened at the dawn of day by the most heart-rending shrieks of an own aunt of mine, whom he used to tie up to a joist, and whip upon her naked back till she was literally covered with blood. No words, no tears, no prayers, from his gory victim, seemed to move his iron heart from its bloody purpose. The louder she screamed, the harder he whipped; and where the blood ran fastest, there he whipped longest. He would whip her to make her scream, and whip her to make her hush; and not until overcome by fatigue, would he cease to swing the blood-clotted cowskin.”

Frederick Douglass was born a slave in Maryland, where supposedly slavery wasn’t as bad as it was further south. His father was a white man and he was separated from his mother when he was still an infant. She died when he was about seven years old, but he didn’t learn about her death until long after it happened.

One master had to sell the children he fathered with his slaves out of deference to the feelings of his white wife. He speaks of an overseer who took pleasure in whipping and was so brutal even the master thought him cruel. Another overseer, who didn’t take pleasure in whipping, was called a good overseer by the slaves.

He details several instances in which slaves were murdered. His wife’s cousin, a teenage girl, was beaten to death for falling asleep when she was supposed to be watching the master’s baby. An old man, who accidentally left his master’s property and trespassed upon another’s, was shot dead. The murderers were never punished because killing a slave wasn’t considered a crime.

Child slaves too young to work in the fields weren’t given clothes except for two coarse linen shirts per year. No shoes, no stockings, no jackets, no trousers. When their shirts wore out, they went naked. The slaves were given no beds, just one coarse blanket. Douglass was often hungry, but suffered more from the cold. The children were fed boiled corn mush in a trough on the ground.

Douglass eventually leaves the plantation, sent to serve a family member in Baltimore. He’s treated much better in the city than he was in the country. He’s better fed and clothed and the masters aren’t so cruel since they don’t want to appear savage in front of their neighbors. However, some slaves are still treated poorly. One of his neighbors whips her slaves and keeps them half-starved so that they have to fight with animals for food thrown out on the street.

He gets transferred again to a place called St. Michael’s. He says his master actually became more cruel after converting to Christianity because religion gave him sanction and support for slave-holding. He’d sometimes quote Luke 12:47 while whipping a slave: “He that knoweth his master’s will, and doeth it not, shall be beaten with many stripes.”

One young white man named Mr. Wilson started a Sunday school to teach slaves how to read the New Testament, but after just three meetings, several white men drove them off with sticks and stones and forbade them to meet again.

Douglass ended up getting rented out for a year to a man named Edward Covey, a poor white man who had a reputation for breaking young slaves. Since Covey, unlike most slave holders, actually worked with his hands, he knew exactly how long each task took, so he couldn’t be deceived into thinking a task took longer than it actually did. He would also pretend to leave, then spy on the slaves to make sure they kept working when he wasn’t present. He’d sometimes crawl through the corn fields, then suddenly appear next to them.

When Douglass is about 16 years old, he can’t take any more abuse and beats up Covey, making it clear that he’d rather die than be whipped again. Covey never whipped him again after that. Douglass isn’t sure why Covey didn’t turn him into the constable, but perhaps Covey would lose his reputation as a slave-breaker if he’d done that.

Interestingly, slaves get a vacation between Christmas to New Year’s. Douglass thinks it’s a kind of safety valve. If slaves didn’t get any time off at all, it would result in an insurrection.

Douglass speaks of a slaveholder named Rev. Weeden who believed slaves should be whipped whether they behaved or not in order to remind them of the master’s authority and another slaveholder named Rev. Hopkins who could always find an excuse to whip a slave. “Does a slave look dissatisfied? It is said, he has the devil in him, and it must be whipped out. Does he speak loudly when spoken to by his master? Then he is getting high-minded, and should be taken down a button-hole lower.”

Knowing knowledge is power, Douglass devoted his Sundays to teaching his fellow slaves how to read. They then make a plan to run away, but get caught. Surprisingly, instead of being punished for running away, Douglass gets sent back to Baltimore to learn a trade. He is hired to a shipbuilder who teaches him how to calk. However, for every six dollars he earns, his master only lets him keep six cents.

Douglass eventually escapes from slavery, but doesn’t go into details as to how he did it to avoid getting others into trouble and to keep slaveholders from learning about the hole in their system. Having been taught that slavery was necessary for a functioning economy, he expected the North to be poverty-ridden and was surprised to find the opposite was true. He found former slaves living in better houses than the average slaveholders in Maryland.