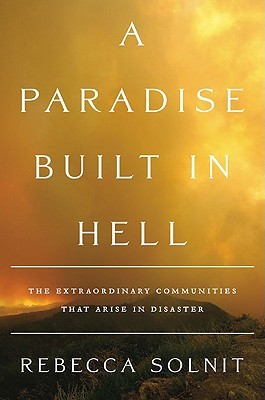 We again see elite panic in the aftermath of the 1985 Mexico City earthquake. The government ordered buildings bulldozed even when there were people still inside. But we also see altruism since many students lay down in front of the bulldozers to stop them.

Factory owners rescued machinery from buildings instead of people and refused to pay the workers their wages, but good came out of this since it led to the formation of a union. The death toll from the earthquake was particularly high, partly due to the shoddy construction of the buildings, but this led to the formation of a housing rights movement.

The earthquake also revealed government corruption. Men who had been tortured to death in the basement of the attorney general’s office were revealed by the quake. The Mexico City earthquake also saw the rise of a real life superhero. A man named Super Barrio who wore a mask like a Mexican wrestler, prevented evictions and stood up for the common people.

Bureaucracies tend to be bad in disasters since they aren’t good at improvising. However, disasters can sometimes lead to improvements in society since they reveal many injustices. They increase activism since people are temporarily knocked out of their comfort zone. For example, the 1755 Lisbon earthquake may have contributed to the enlightenment.

In the aftermath of the September 11th, 2001 terrorist attacks in New York City, we see the same coming together of community. Volunteers helped for months afterward. People in the towers evacuated calmly and politely. Solnit gives an account of civilians helping a firefighter while the police stood by dazed. Lots of people with boats helped evacuate. Rather than PTSD, post traumatic growth seems to occur after most disasters. Again, the people who panicked the most were the people who weren’t there.

In 2005, Hurricane Katrina struck the Gulf Coast of the United States. It’s a horrendous scene. People trapped on rooftops watch as bodies, coffins, and alligators float by while pelicans and sea gulls try to eat them.

As in the 1906 San Francisco earthquake, the police treated victims like criminals and were more concerned with protecting property than saving lives. The police pointed guns at people and drove past refusing to help. The victims were treated like prisoners. They weren’t allowed to leave the Superdome which was flooded with sewage. And actual prisoners were left to die in a flooded jail without food or water.

We see elite panic once again. The police chief claimed there were hundreds of gang members in the Superdome murdering and raping everybody even though this didn’t actually happen. The media spread false rumors only retracting them after the damage had already been done. The only murders that actually happened were committed by police and the military against civilian victims who they irrationally feared.

The mayor and governor called off search and rescue operations in order to use the police to prevent looting instead. As in the San Francisco earthquake, it turned out the police did most of the looting themselves by stealing guns, jewelry, computers, and even cars. Elites often justify their own selfishness by believing the poor are just as selfish as they are.

The federal government delayed evacuation due to racism. FEMA turned away volunteers and supplies, claiming the city was unsafe to enter, while President Bush’s friends got contracts and charged exorbitant sums. When FEMA finally got around to entering the Superdome expecting to find hundreds of bodies, there were only six. All the media’s talk of murder was fictional.

A lot of New Orleans residents owned guns, but they were mostly used to fire into the air to get attention. There were a few people shooting at the cops, but for the most part, the victims were friendly to police, even providing them with food and water. Meanwhile, the military and the Black Water mercenaries acted like they were entering a war zone and murdered dozens of black men and dumped their bodies in the river.

Danny Brumfield was shot in the back by police in front of his kids in broad daylight because they thought he was going to attack them. In reality, he was going to use the scissors to cut up cardboard to make a shelter. Police make mistakes like this all the time when they see black men because they immediately assume the worst.

Many white residents of New Orleans had the means to evacuate, but didn’t because they wanted to stay to protect their property. They formed vigilante groups and murdered any black people they thought of as suspicious.

The government’s mishandling of Hurricane Katrina is especially scandalous when you compare it to Cuba where hurricanes are common, but deaths are rare because they’re much better organized.

Of course it wasn’t all bad. As in other disasters, there were numerous volunteers and organizations, both conservative churches and liberal counter cultural movements, who stepped in to help when FEMA and the Red Cross failed to do their jobs. An organization called Common Ground was founded to help people.

Solnit’s thesis is that common people are altruistic in disaster, while the elites panic, but are the vigilante groups who panicked and started murdering people in the aftermath of Hurricane Katrina and the Great Kano Earthquake really elites? Aren’t they common people too? I think all we can really say for sure is that when disaster strikes, some people panic and some don’t.