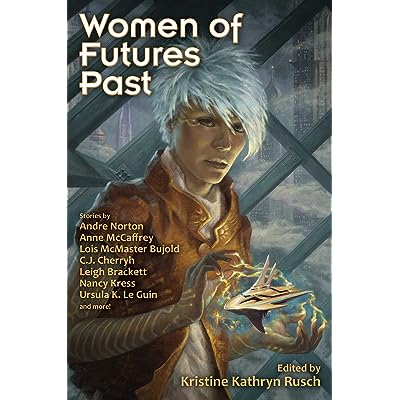 Women of Futures Past starts with an introduction by Kristine Kathryn Rusch in which she gives us a fascinating behind the scenes look into the science fiction publishing industry. (She also introduces each story.) She tells us that many people assume women writing SciFi is a recent phenomenon even though women have been writing SciFi from the beginning. The reason people think women weren’t part of science fiction in earlier decades is because female writers are often left out of Best Of anthologies which effectively erases them from history. She says this is partly due to literary SciFi being favored over the type of SciFi women often write such as space opera. This anthology was created to shine a light on past and present female science fiction writers who haven’t gotten the attention they deserve.

I hate to say it, but my own personal tastes lean more towards the literary side, so I didn’t enjoy most of the stories in this collection. The Indelible Kind by Zenna Henderson (about a teacher trying to understand a strange new student), The Smallest Dragonboy by Anne McCaffrey (about a boy training to become a dragon rider), and Out of All Them Bright Stars by Nancy Kress (in which a waitress meets an alien) were all meh for me.

I wanted to like Shambleau by C.L. Moore due to our shared surname, but this Western on Mars was far too wordy. The Last Days of Shandakor by Leigh Brackett (about a Martian ghost town) and All Cats Are Gray by Andre Norton (about a haunted spaceship) were both meh for me as well. I found Sur by Ursula K. Le Guin (a story about an expedition to the South Pole) to be incredibly boring.

Aftermaths by Lois McMaster Bujold is my favorite in this collection. An excellent story about body retrieval in the aftermath of a space war. When a pilot says an enemy’s body should be dumped with the rest of the trash, the medtech replies, “Think of all the work he represents on somebody’s part. Nine months of pregnancy, childbirth, two years of diapering, and that’s just the beginning. Tens of thousands of meals, thousands of bedtime stories, years of school. Dozens of teachers. And all that military training, too. A lot of people went into making him.” Fire Watch by Connie Willis, in which a time traveler goes back to the London Blitz was also excellent. I guess I liked these two stories the best because they’re the most literary.

I’ve found that most multi-author anthologies tend to be a mixed bag, and this is no exception. By my admittedly subjective count, there are seven stories worth skipping, three stories that are pretty good, and two that are excellent. But everybody’s tastes are different, you might very well enjoy all or none of these stories yourself.