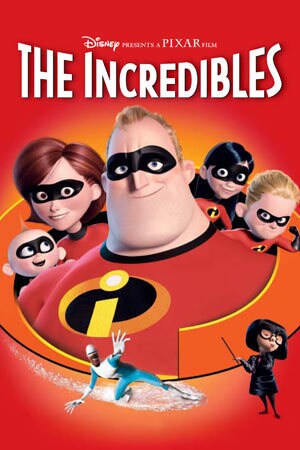 I didn’t like The Incredibles (2004) the first time I saw it. Now that a sequel is coming out, I thought I’d give the original movie another chance. Let’s see how that goes.

In the opening scenes, we learn that superheroes used to be worshiped, but, much like in the Watchmen graphic novel (1986-1987), vigilantism is declared illegal. Mr. Incredible and his wife ElastiGirl settle down and have a family. ElastiGirl is fine with being a stay-at-home mom, but Mr. Incredible is miserable in his insurance job and wants to be a superhero again. Their daughter Violet lacks the confidence to speak to a cute boy at school and their son Dash wishes he didn’t have to keep his superpower a secret.

In a way, this is a jocks versus nerds movie with all the heroes being jocks and all the nerds being villains. When Dash places a tack on his nerdy teacher’s seat, Mr. Incredible praises him. This must be why Dash is such an entitled brat throughout the movie. We’re supposed to feel bad for Dash because his parents don’t let him use his super speed to cheat at sports, but he’s not a likable character at all.

There’s a scene in which Mr. Incredible helps a little old lady navigate the bureaucracy of the insurance company even thought he’s not supposed to, which shows he’s still helping people out in his own way. This was nice to see. Unfortunately, Mr. Incredible has anger control issues and ends up throwing his nerdy boss through several walls, nearly killing him. What a nice guy! Instead of going to jail for attempted murder, Mr. Incredible gets away with just being fired.

Fortunately, he gets offered another job being a superhero again. Unfortunately, it turns out his mysterious new boss is a supervillain called Syndrome who wants to kill him. Syndrome originally wanted to be Mr. Incredible’s sidekick, but he was a nerd so Mr. Incredible brushed him off and now he’s evil. Syndrome doesn’t have natural superpowers. Like Batman and Iron Man, his superpowers come from technology, which in this movie is a bad thing for some reason. Only people born with superpowers should be allowed to be heroes, I guess. Other villains we see in this movie (Bomb Voyage, The Underminer) are also nerds who use technology while all the heroes are jocks who are born with their superpowers.

Later, when Mr. Incredible thinks that his family is dead, Mirage shows up and frees him. She’s about to tell him his family is still alive, when he starts choking her to death. What a nice guy! Fortunately, ElastiGirl shows up and Mr. Incredible tosses Mirage to the side like a piece of trash. ElastiGirl then punches Mirage in the face in a fit of jealousy. What a nice gal! Despite this second attempt on her life, Mirage is still on Mr. Incredible’s side and helps him out again later. So I guess the moral of the story is, if you repeatedly try to kill someone, they’ll realize you’re the good guy and help you out?

Syndrome’s evil plan is to give everybody superpowers, because once everybody is super, no one will be. (Insert evil laugh here.) This is apparently the main message of the movie since it’s stated twice. (Earlier Dash complains that if everyone is special, that means no one is.) Equality is apparently a bad thing in this movie. The message of the movie seems to be that some people are just born naturally superior to others and all the rest of us should just learn our place and accept our second-class status.

This movie wasn’t all bad. One thing I did like about it is the action sequence in which Elastigirl is stretched out between three doorways and takes out a few henchmen. I also liked when she saved her children by turning first into a parachute, and then a boat when they found themselves falling into the ocean. I also liked that Violet gained confidence over the course of the film. So there are some good things about the movie, but they’re far outweighed by the bad.

I watched this movie with my five-year-old and I’ve got to say, it’s not a movie for young children. Aside from teaching bad morals, it’s just too serious for young children to enjoy. There’s too much death and not enough fun parts. It scores low on the humor scale since the jokes are old. The best joke in this movie (about capes causing superhero’s deaths) is taken from the Watchman comic in which Dollar Bill dies due to his cape getting stuck in a revolving door.

Hopefully, the sequel won’t be as bad as the original, but I’m not counting on it.