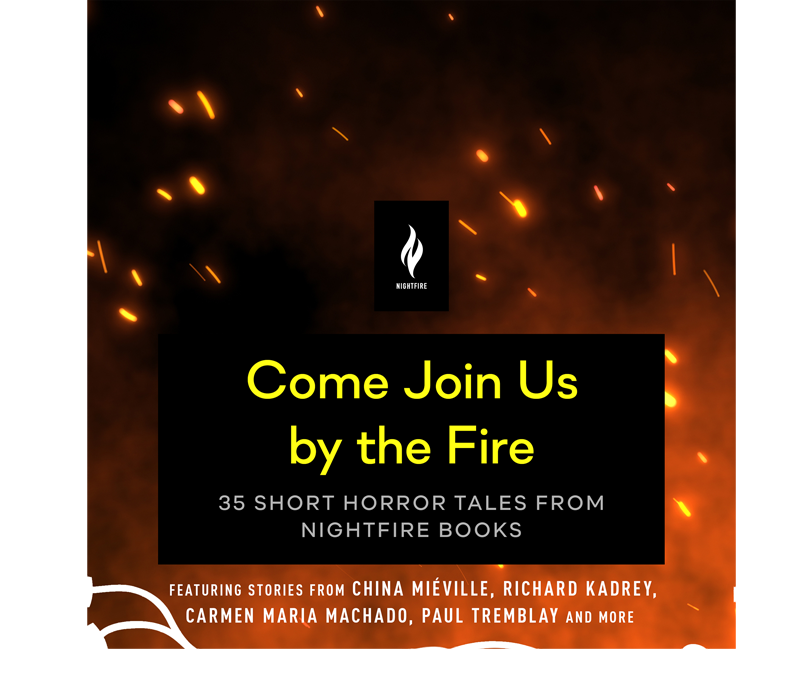 Come Join Us by the Fire is an audio collection of 35 horror stories that’s available for free if you have the Google Play Books app. The stories range from flash fiction pieces only a couple minutes long to proper short stories closer to the half an hour range. Some of the authors provide more than one story.
Most of the stories involve the supernatural or are surreal in some way. Many of them are metafiction or deconstructions of common tropes, which gives the impression that there isn’t much new to say when it comes to horror. Several of these are reprints, but if you haven’t heard them before, they’re new to you.
As with any multi-author collection, I liked some stories more than others. I find that I personally preferred the longer stories. The ones that were less than 10 minutes just didn’t seem to have enough substance for me to really sink my teeth into. Although, the narration and sound effects are well done throughout.
“Midnight Caller” by Stephen Graham Jones is a comedic story featuring a final girl calling a 911 operator who seems bored with getting calls from survivors of 80s slasher flicks.
“Daddy” by Victor LaValle is about a new father who’s worried he’ll turn out to be a cruel parent and must battle his inner demon. “The Girls from the Horror Movie” by Gwendolyn Kiste is about twin child actors who have grown up, but are still best known for a horror movie they did as kids. One of the twins goes to a fan convention hoping to restart her acting career and ends up being haunted.
“Ponies” by Kij Johnson takes place in a world in which little girls have magical talking ponies for friends, but the cost of becoming friends with the popular girls is absolutely horrific. “Don’t Turn on the Lights” by Cassandra Khaw is a deconstruction of a popular urban legend. In “Was She Wicked, Was She Good?” by M. Rickert, parents allow their child to torture fairies to death then worry about retaliation. I can’t help wondering why it never seems to occur to them to, you know, tell their daughter not to torture fairies.
I really liked Brian Evenson’s western “Black Bark” as well as Priya Sharma’s “The Anatomist’s Mnemonic” about a creepy guy with a hand fetish. “The Beasts of the Earth, The Madness of Men” by Brooke Bolander is a great Moby Dick story while “Wasp & Snake” by Livia Llewellyn shows us the horror of body modification when someone adds a chromium tail with an interdimensional stinger to their body.
I’d heard “Greener Pastures” by Michael Wehunt on a podcast before and his tale of a long haul trucker still stands up. “And When She Was Bad” by Nadia Bulkin gives us another good final girl deconstruction. “El Charro” by John Langan features a Mexican vampire and Langan himself appears to be a character in it. “Dream Home” by Kat Howard and “Spawning Season” by Nicholas Kaufmann also stand out.
I shouldn’t have liked “57 Reasons for the Slate Quarry Suicides” by Sam J. Miller. It’s one of those gimmicky list stories and it’s also a revenge story which I generally don’t care for. However, I ended up really liking this one. “That Which Does Not Kill You” by Lucy A. Snyder is another good one featuring someone whose heart gets ripped out.
My favorite story in the collection is “The Design” by China Miéville, which is by far the longest story in the collection at over an hour. In it, a medical student dissecting a body discovers that the person’s bones have symbols carved into them which were there from birth.
Overall, this was a decent collection. Well worth a listen.