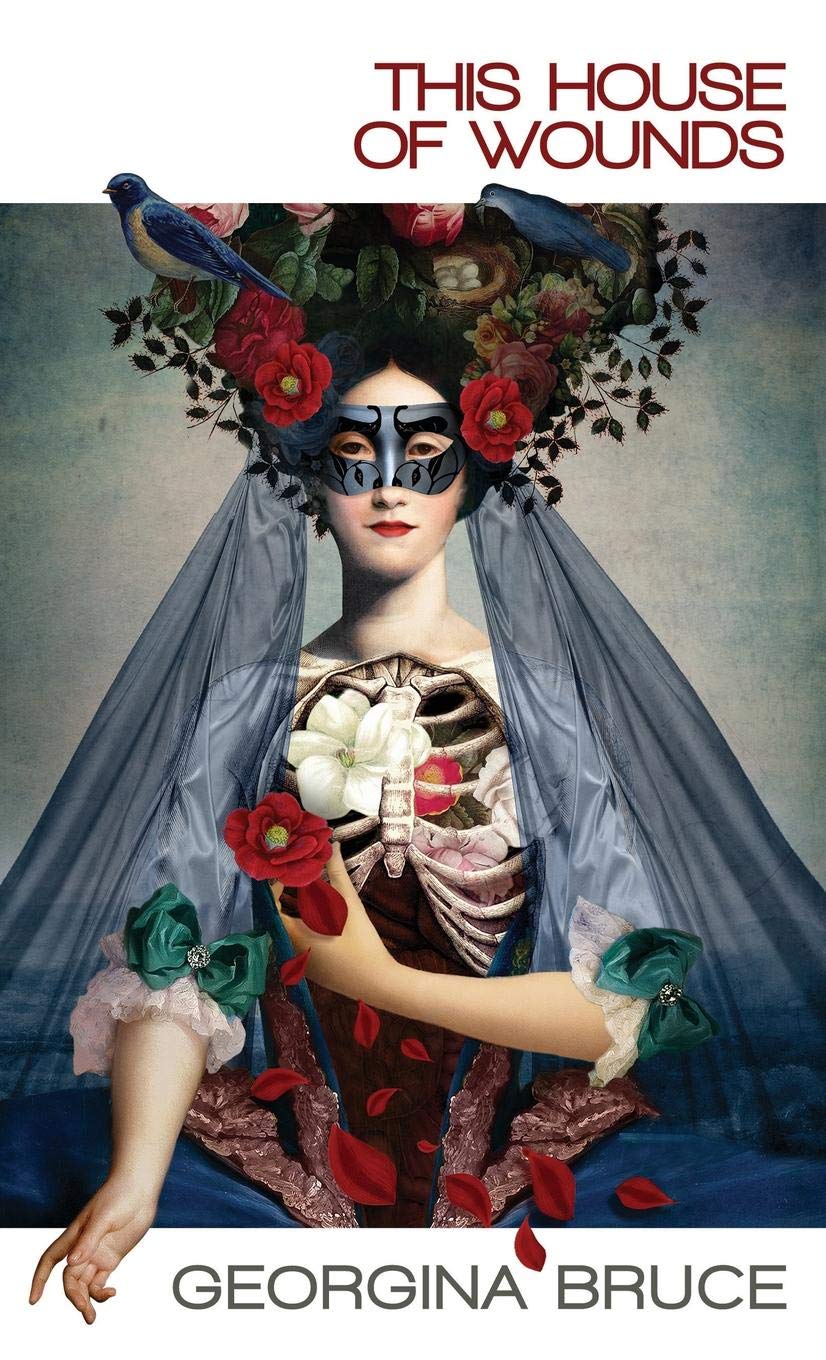 Several reoccurring themes emerge in this collection. Many stories reference Alice in Wonderland, as well as blood, doors, smashed mirrors, the beach, sisters, unreliable memories, madness, dreams, movies, men and women in conflict, doppelgangers, metamorphosis, people with dog masks, and out-of-body experiences. Also, several of the stories make references to the cover image. While the repeating images would normally feel repetitious to me, they don’t here, taking on thematic tones. It’s actually repetitious in a good way. The stories also make references to each other on several occasions, so many of them take place in the same world.

“The Lady of Situations”, the first story in This House of Wounds and original to this collection, starts with “I smash my face into the mirror.” It’s a great opening line that grabs your interest and makes you want to read more. Like many stories in this collection, it’s hallucinatory and dream-like, making you question reality. What’s actually happening is a mystery. It’s unsettling and disturbing in a compelling way. There are abrupt dream-like transitions like “The sky thickened and curdled to pitted white tiles, became a ceiling” which keeps the reader off balance in a good way.

There are numerous fantastic lines like “a white thread of lightning flashed through the cloud’s arteries and veins” and “she couldn’t douse water, or set fire aflame.” The language is very poetic and filled with great imagery, which caused me to read slower than usual so I could savor each sentence. It switches from third person to first person to indicate when the narrator leaves or reenters her body. We’re given hints that leaving the body could be due to a car crash, a rape, or death.

The stories often work by dream logic as when the narrator eats a book in order to read it, battles against her own body, or switches identities. Surprise twists come fast. Sometimes one sentence upends the one that came before. I loved the idea that we turn into music or some kind of vibration after we die. I wish I could write like this. It does what fiction is supposed to: it elevates the reader out of the mundane world.

The next story, “Red Queening”, also original to this collection, makes references to Alice in Wonderland which makes me wonder if the smashed mirror is a reference to Through the Looking Glass. In this story, the characters of Aven and Neva (whose names are mirror images of each other) seem to have a similar relationship to Rachel and Diane in the previous story. This is another surreal story featuring a rabbit woman. Here’s one line I particularly liked: “But even as she slipped through the door of herself she met herself coming back the other way.”

“Her Bones the Trees” continues the themes of the previous two stories. “Movies weren’t real, and neither were dreams. But even her memories were strangely vague, floating free of their context, like dresses hanging in the air, waiting to be plucked.” Again, dream and reality blur. I particularly liked a dream Laura had in which she finds herself on stage in front of a large audience filled with dolls, but she can’t remember her line. “Had her body ever been touched with love? No, never. Or with desire? No. Tenderness? Not even a glancing blow. They kissed her with broken glass. Caressed her with knives.” I found this story to be particularly scary. I also continue to love the poetry of the language. “The proud antlers that crested around his head seemed to tangle and weave in and out with tree limbs and branches. As though he wore the whole forest for his crown.”

In “Cat World”, chewing gum transports a pair of orphaned sisters, 12-year-old Oh and 8-year-old Little One, to another world where they remain until the gum loses its flavor. Little One likes to pretend to be a baby. They need this in order to escape the harsh reality of their real life in which girls their age often end up at a brothel. This is a heart-rending tale. It’s a different tone than the previous three stories.

In “The Book of Dreems”, Kate has amnesia and Fraser, the man in her life who is old enough to be her father, is trying to convince her that she’s crazy. He makes unreasonable demands such as ordering her not to have dreams. The story makes the claim that it’s common for the brain not to remember traumatic events in order to protect you. This isn’t actually true. Post-traumatic stress usually, if not always, works the opposite way, forcing someone to relive the traumatic event over and over again, unable to forget. The belief that trauma causes amnesia is more Hollywood than reality, but it still makes for an interesting story. The Travel Gum from the previous story is mentioned in this one.

“The Shadow Men” is another story featuring a woman with a missing sister. In this story, a man becomes detached from his shadow, and actually ends up becoming jealous of it. I liked this line: “And his shadow walked over the grass before him, and beside him, doubled like hands of a clock, long and thin and wavering like ghosts.”

The next story “Kuebiko” repeatedly quotes from the Pink Floyd song “Comfortably Numb”, indicating this will be another story about altered reality. The sisters/doppelganger theme is revisited in the form of twin sisters Raewyn and Tanith and we get another uncaring male character in the form of Pete. In this story, bodies are houses and the womb is a door.

Given the heavy nature of the stories so far, it was nice that “Dogs” contained a bit of humor. (When a psychiatrist ticks a box on his notepad, the patient imagines it’s the “smile at patient” box.) I liked a moment in which the narrator was wearing a dog mask and when she coughs, it sounds like barking.

“Wake Up, Phil” is reminiscent of George Orwell’s 1984. Instead of a totalitarian government, a totalitarian company is in charge. Laura is required by her company to take weight-loss pills. Callitrix and Serberus are rival companies at war with each other and people can’t go outside due to something called the Glare. It seems to take place in the future at first, but then it shifts into the past. As in the previous story, there’s a therapist associated with a dog.

“Crow Voodoo” is a story about someone who is part crow and part human. “The Queen of Knives” stars a self-harming kindergartner who is obsessed with knives and we see another mirror get smashed. “The Art of Flying” includes a man with the head of a dog and out-of-body travel.

“Little Heart” mentions the desire to smash a mirror as well. The doppelganger in this story is the film version of the narrator’s mother. The usual themes of blood, madness, out-of-body experiences, Alice in Wonderland, and dreams also reappear here. There’s a particularly disturbing scene in which Anna sees her parents having sex while her mother is all bloody. Anna has trouble telling the difference between dreams, film, fantasy, and reality. One of my favorites.

The final three stories in the collection are my least favorite, but there’s still a lot to like.  “The Art Lovers” is about a misogynist art student traveling through Europe. “The Seas of the Moon” deals with postpartum depression and compares pregnancy to hosting a parasite. I liked the image of “drowned mouths all open and full of sand.” In “White Rabbit”, Alec is morning the death of his wife of 58 years. It features Jefferson Airplane song lyrics, but they’re repeated so often they’re annoying. It’s not my favorite, but it won the British Fantasy Award, so obviously tastes can vary.

This is one of the most amazing short story collections I’ve ever read. The previously unpublished stories towards the front of the book tended to be my favorites, although even the stories towards the end of the book which weren’t my favorite are only inferior when compared the best stories in this collection. If, like me, you love surreal stories that operate based on dream logic, you’ll definitely love this.