Today, I’m reviewing two recent releases from Crystal Lake Publishing. I originally wasn’t planning on purchasing either of them, but immediately before Doll Crimes was published, its author, Karen Runge, was brutally attacked by poachers in a nature reserve. I felt the least I could do to help support her was pre-ordering a copy of her book.

Power is a short story that cost only 99 cents, and since I had an Amazon digital credit for that amount which was about to expire, I thought why not give it a try? 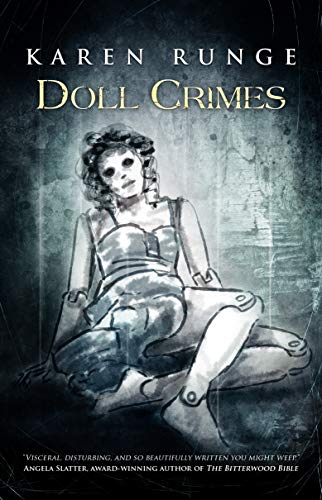 “What crimes can a doll commit?”

It’s possible I missed it, but I don’t believe the real names of the mother and daughter duo at the center of Doll Crimes are ever given. There’s only a 15-year age difference between the two, so they’re more like friends than mother and daughter when we first start out. I once knew someone whose mother was only 15 years older than her, so this characterization rings true to me.

The mother and daughter are constantly traveling from one town to the next on a never-ending road trip. The mother keeps much of her past secret from her daughter. Money is always a problem, so the mother has a series of boyfriends who they rely on to get by, but who they also must flee from after a while, so they live in a constant threat of danger.

The book tends to give summaries of their life rather than presenting distinct scenes. There isn’t a lot of back and forth dialogue. We get a lot of Momma’s homespun philosophy in the early chapters including how difficult it is to be a single, underaged mother. “Momma says kids don’t realize how much they hurt their parents. She says being a parent is always about being hurt by your kids or hurting for your kids.”

I wasn’t sure if this was a horror book or not until I got to Chapter 7. There, we learn that when the daughter looks at someone with her third eye, she kills them – in her mind at least.

The story moves back and forth in time in a stream-of-consciousness way and the pacing is rather slow. It’s a bit of a mystery how old the daughter is in the present time. She herself doesn’t know for sure. She says she can pass for anywhere between 12 and 17 depending on her wardrobe and makeup.

The true horror of the daughter’s situation is gradually revealed in bits and pieces throughout the book. She has to grow up fast. She’s “home-schooled” by her mother and doesn’t get to spend time with other kids. She subjected to sexual abuse at the hands of some of her Momma’s boyfriends. Also, we gradually learn that her Momma isn’t as nice as we are initially led to believe. Her Momma lets her smoke weed, sometimes hurts her when she’s drunk, and does other things that are even worse. 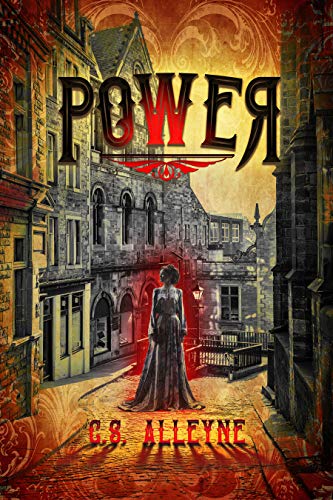 Power centers on Maude, a sixteen-year-old orphan living with her abusive step-father in Victorian London. With disease and hunger constant threats, it’s a difficult time to be alive. We get a less glamorous picture of the Victorian era than many books set in the same time period. Dirty streets are crowded with people, horses, and manure. The lower classes are at the mercy of the upper class. C. S. Alleyne obviously researched the time period. I appreciated the references to Madame Tussaud and Cremorne Gardens, among others, although I would have liked to see more slang from the time period.

Maude is eventually pushed into posing for lewd photographs and gets sexually assaulted by a customer. She then immediately starts planning her revenge. Since this is a short story, it’s difficult to review it without giving too much away, but let’s just say Maude is surprisingly sadistic, although maybe it shouldn’t be too surprising given her upbringing.

I personally don’t care for revenge stories and I found this one to be rather over-the-top, but as everyone’s individual tastes vary, so too will your enjoyment of this story.