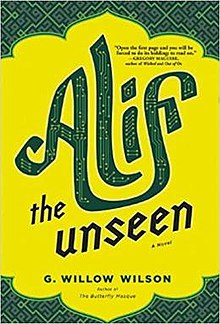 “They had no idea what it was like to live in a place that boasted one of the most sophisticated digital policing systems in the world, but no proper mail service. Emirates with princes in silver-plated cars and districts with no running water. An Internet where every blog, every chat room, every forum is monitored for illegal expressions of distress and discontent.”

Alif the Unseen by G. Willow Wilson takes place in a modern middle eastern country, but it’s similar to a science fiction dystopia being ruled by a totalitarian government. I’ve got to say, setting a story in a realistic dystopia is far more interesting than the fictional dystopias that litter the world of science fiction.

The country isn’t named, but at one point, a character contemplates crossing the border into either Oman or Saudi Arabia, indicating the story takes place in either Yemen or UAE. The city is called only The City, but we’re told it was part of the Silk Road. Doing a quick search, UAE isn’t listed on Wikipedia’s Silk Road page while Yemen is part of the maritime silk road. However, the map at the beginning of the book shows the Persian Gulf to the southeast of The City, which rules out Yemen. So I don’t think the author had any particular country in mind.

Our viewpoint character, Alif, prefers to go by his hacker name rather than his given name. He is a gray hat, which means he’s not opposed to breaking the law, but he does it for good reasons. He helps political dissidents of all stripes keep their computer activities secret from the state, although he does it for a fee.

He’s in love with a woman who only wants to marry a full-blooded Arab. The trouble is, Alif is part Indian and his mother wants him to marry an Indian girl. He has an absentee father who spends all his time with his first wife and the family he has with her, largely ignoring Alif and his mother who is, after all, only his second wife. Interestingly, his father would have preferred Alif be a girl since women can marry up, while a boy needs his own prospects.

One aspect of the book I found really interesting is the dynamic created by veils. Since many women in this society wear veils, Alif can’t read their facial expressions, making them inscrutable to him. It also makes it difficult to tell if the woman he’s dating is beautiful or not.

“When he saw Intisar for the first time, he envied her the enfolding anonymity of her veil; he did not know if her hands shook as his did, or if her face was flushed, or if her feet, like his, refused to obey her. She had the upper hand. She could observe him, make up her mind about whether he was handsome, assess his tendency to wear all black and decide whether this offended her or not. He, on the other hand, could do nothing but fall in love with a face he had never seen.”

His childhood friend, Dina, also wears the veil even though, being lower class, she’s not expected to. One of the ways men harass women is by pulling off their veils in public. We also learn that it takes practice to eat or drink effectively while wearing a veil. Another interesting dynamic at play in the story is the fact that a woman’s reputation can be ruined if she spends any time with an unrelated male in private. Taxis won’t even give a ride to a man and woman who aren’t related.

I liked that after a sandstorm, we’re told sand gets inside rooms even with the windows taped up. Alif has to use his mother’s hair dryer on a no-heat setting to clean sand out of his computer. It’s not something I would have thought of and it adds verisimilitude to the story. Also, the air is clean after a sandstorm, since the sand clears pollution out of the air. This reminded me of how nice the air in Salt Lake is after rain has cleaned the smog out of our air. Other details, like the muezzin’s calls to prayer being heard throughout the city, really situate you in this world.

After a bad break up, Alif creates a computer program that can identify someone based on their typing pattern, word choice, etc. This way, even if someone is using a different computer or masking their IP address, they can still be tracked. The trouble is, if a government spy program breaks into his computer, this could spell disaster for the political dissidents he’s trying to protect.

As the story progresses, Alif ends up on the run from the government and finds out that jinn, which are mentioned in the Koran, actually exist. He’s also given a legendary book called the 1001 Days, the counterpart to the 1001 Nights, so we also get stories within stories.

One issue I had with the story is we’re never told the name of one of the characters. She’s just called “the convert” throughout, which created a bit of awkwardness anytime she was mentioned. I wonder if there was a reason for this decision. In an interview with the author included at the end of the book, G. Willow Wilson says even though she’s a convert to Islam herself, the convert isn’t based on her.

I loved this book overall and would highly recommend it. It’s certainly a breath of fresh air anytime you read a book that takes place in a culture different from your own.