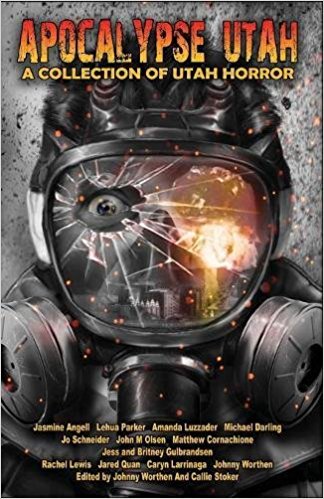 As with all anthologies, this one is a mixed bag. Some stories are better than others (which ones are better than which of course depends on your own personal preference). This collection features both pre- and post-apocalyptic stories. They all take place in Utah, although the setting is usually incidental. The end of the world takes different forms from Biblical punishment, zombie virus, non-zombie virus, magic, and one even features cats. A theme I noticed is that most of the stories are pessimistic about human nature. I always wonder why people in stories like this always prey on each other rather than band together against the zombies or crab people or whatever is threatening them.

I really liked “Time to Think” by John M Olsen because it deals with my personal worst fear. Saying more than that would be a spoiler. I also liked “Crustacea” by Matthew Cornachione because a mother trying to shelter her son from the apocalypse is an idea I haven’t come across before. “The Fishermen” by Caryn Larrinaga had a surprising ending which I liked. “Before, When the Words Were There” by Rachel Lewis was another that stood out as better than average. My favorite in this collection was “Flame Unspeakable” by Johnny Worthen since the apocalypse being tied to politics felt more realistic than the other end of the world scenarios presented.