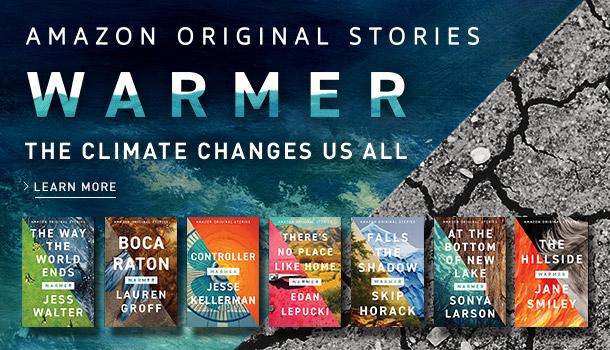 “At the Bottom of New Lake” by Sonya Larson

In Cape Cod, a fourteen-year old schoolgirl named Chuntao dives for treasure in a new lake created by flooding. However, her teacher is horrified because she considers it grave robbing. Mrs. Fletcher tries to make her feel bad for the people who lost their beach homes in the flood, but Chuntao doesn’t care because her family was never rich enough to own beach-side property in the first place. Mrs. Fletcher tries to convince her that global warming is her problem because China leads the world in pollution (not taking per capita pollution into account anyway). Chuntao doesn’t care about global warming, but ironically, she’s more environmental than Mrs. Fletcher due to her poverty. She rides a bike instead of driving, has a smaller house requiring less resources, and so forth. She thinks it’s unfair for the adults to place the duty of fixing climate change on the younger generation when the older generation was the one who caused the problem. The story makes a good point.

“Falls the Shadow” by Skip Horack

Combat-vet Joel gets his fifteen minutes of fame after being in a commercial. Years later, a rich man pays him to appear at a wildlife conservation expo. He shows up because the money is good, but he’s not sure why he’s there. The rich man gives a speech about assisted migration. He argues that if a plant or animal is in danger of extinction, we should transfer it to a new location to help it live. His plan is to save polar bears from extinction by moving them to Antarctica. But will this cause problems for the penguins? I liked Joel’s character, but I’ve got to say, not much happens plotwise in this story.

Vic (short for Victoria) lives in a world where water is scarce and temperatures are rising. It’s dangerous to go outside without sunscreen. The richest people are investing in a space colony and the regular rich people have moved from hot places like LA to cooler places like Manitoba. Tucson’s temperatures are as high as 141, Miami has been submerged. Famines, droughts and floods have made much of the world inhospitable. Polar bears and rhinos are extinct. Children aren’t going through puberty anymore and people aren’t sure why. It may be due to malnutrition, poor air and water quality, or the warmer temperatures.

After Vic’s schoolteacher dad kills himself in his backyard sauna, thirteen-year-old Vic has to get a job to help support herself and her mother. Kids don’t go to school anymore unless they can afford a private tutor. Men typically join something called the Forces. Not clear exactly what this is or why women aren’t allowed to join. Seems to be a kind of private police force.

I disagree with the statement that women didn’t cry over dead children back when infant mortality was higher because back then death was a fact of life. Of course people still mourned when the life expectancy was lower. You can even look at people living in extreme poverty today who have high infant mortality to see that this statement isn’t true. An interesting story, but I didn’t like how pessimistic it was.

In the near future, a mother and son fight with each other over the temperature in their house. The son wants it cooler, but the mother likes it warmer. The mother is the one who has the rights to control everything in the house, including the thermostat, however, she requires a caretaker, so the two are in a constant tug-of-war with each manipulating the other to get their way. Interesting character study.

After discovering chicks who died from eating plastic, a librarian named Ange loses her appetite and gets insomnia worrying about global warming. Her absentee husband may or may not have died in a hurricane. She starts to have vivid visions (or perhaps hallucinations brought on by lack of sleep). I liked the way the hallucinations were described. It’s a fairly pessimistic story, but there is some optimism.

“The Way the World Ends” by Jess Walter

A freak snow storm brings three people together on a college campus: a couple climate scientists both interviewing for the same job and a college student who just barely came out as gay. The anxiety caused by global warming is referred to as “pretraumatic stress disorder”. Much of the story focuses on the frustration climate scientists feel when their warnings of impending disaster are ignored, so there’s a lot of pessimism. Since the world is basically doomed, the climate scientists decide to eat, drink, and be merry while they’re still alive. Despite how I’ve described it so far, this story is a lot of fun as the college student witnesses the adults’ bad behavior. There’s a lot of fun characters including a surprise cameo from a celebrity. It even manages to end on a somewhat hopeful note. Best story in the collection.

“The Hillside” by Jane Smiley

Takes place in a future in which animals rule the world and humans are wild beasts. Humans are put on trial by the rest of the animals and found to be wholly without value. It’s decided they must be exterminated to save the planet. (In this story, human females actually aren’t that bad, but human males are so horrible, all humans must be destroyed to prevent disaster.) Our point of view character is a mare named High Note who befriends a human named Plucky despite such friendships being forbidden. There’s a little bit of humor (we’re told cats only pretended to be domesticated), but overall, this story is just not my kind of thing.